Our Story, Part 1: The Younger Years

In years past a few of my friends wrote up the story of how they and their spouse met, fell in love, and got married. That sounded like fun, so I got our story all written up and turned it into a wall hanging. I’ve loved having that in our bedroom as a reminder of everything that came together. Today, on the 9th anniversary of us beginning to “officially” date, I went and found the document where I wrote the story up and reread through it. I love our story. It’s us.Recently I have had a few people ask how we got together and I was able to give them a condensed version of the story. But the condensed version just isn’t as funny. You really do need the whole story to get it. Writing the story up took rereading Journals, talking with a few people, and lots of conversations between Cameron and I. Figuring out where to start was a little hard. We could start when we first began dating. But that leaves out pertinent information and experiences. Starting even at the beginning of our college friendship isn’t going back far enough. We had to go back to when we first met to really get a good feel for the story. But that became problematic. I’ll just let the story start there.
.
Cameron and Marquette don’t know exactly when it was that they first met. Marquette’s first memory of the Mowers is from when she was 12 when her family lived in Edgewood, NM, so it is assumed that she met Cameron around then…but it could have been a little earlier for all we know. Cameron and Marquette grew up in the same Stake (a geographic area covering around 7-10 LDS church congregations-called Wards) with church, but were in different Wards, Cameron in the Estancia Branch and Marquette in Edgewood Ward. At that time the Albuquerque LDS Temple had not even been announced yet, so the closest LDS temple for them was in Mesa, AZ.
.
The Stake chartered a bus for a temple trip for all the youth in the Stake to go attend the temple. While the two have no memories of each other on the trip, fate was hard at work. Marquette and Kerry, Cameron’s dad, got to know each other a little bit on the trip and stood in line together for lunch at the Furr’s Buffet. Eventually Marquette’s Dad, Scott, was a High Councilor at the same time that Kerry was the Branch President. Scott was assigned to be the High Councilor for the Branch and was highly involved there, so naturally Marquette would tag along occasionally to various activities. Mud volleyball, youth temple trips, stake dances, etc. all were attended and became regular. Scott gave Marquette the excuse that the branch could use the boosted numbers and support, but suspicions have been voiced that maybe there were other reasons. Scott often teased Marquette about taking her to see her future in-laws.
.
Both families had been involved in 4-H for a number years at this point, the Mowers more heavily involved than the Richins, but it was sometime in 2000 that Paralee, Marquette’s mother, decided that they needed to change 4-H clubs. They changed from the Moriarty club over to the Stanley 4-H club, which was the club the Mowers were highly involved in. The Richins’ kids didn’t really know why she had them switch clubs…but they didn’t really worry too much about it. Little did everyone know there were other plans at work. Or at least that’s the running joke now. At this point Marquette was
right around 14 and Cameron was 16. Cameron was a senior in 4-H and he was a whole 2 years older than Marquette…so they didn’t actually talk much, but there were some interactions. One meeting Cameron taught the group how to make paper airplanes and then there was a paper airplane flying competition.
.
As the two-year age difference was a big deal at that age, Ethan (Cameron’s younger brother) and Marquette got to know each other a little. Marquette didn’t really know how to take Ethan though (one day they were learning how to do charcoal drawing at 4-H and Ethan walked up and said, “That looks so good I’m going to have to burn it.” and walked off), so they weren’t the closest of friends. Kathleen, Cameron’s mother, and Marquette got along well though, each enjoying the other. Cameron and Marquette both attended youth church dances. Cameron’s parents would remind him as he went out the door, “Make sure to dance with Marquette Richins!” and like a good son, Cameron did his duty and endured the weird conversations of an awkward 14 year old girl. 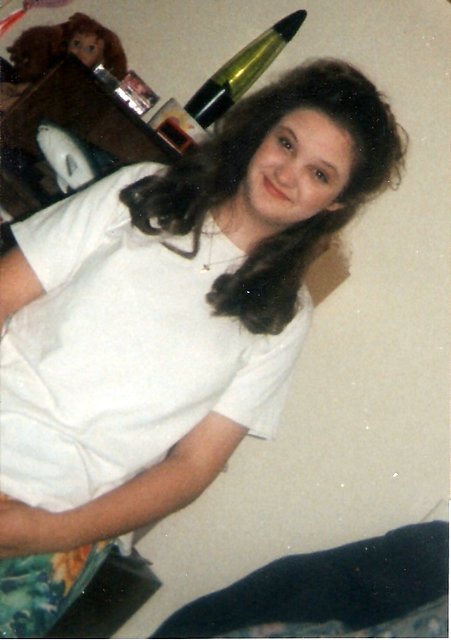 But again…the “huge” age difference was just too much and the two remained friendly acquaintances. Often Marquette’s parents could be heard telling her, “You can marry anyone you want, as long as it’s one of the Mower boys.” Of course this just brought rolled eyes and a “Whatever mom.”
.
One evening the Mowers and Richins were at a mutual friends house for the evening (Marquette’s Great Uncle’s home). At the time Marquette’s youngest brother Heber (4 years old) did a funny “trick”, when you held him upside down by his ankles, he would start twisting his torso back and forth spinning as fast and hard as he could. Marquette’s cousins and the Mower boys thought that was funny, so they got Cameron picked up by his ankles so he could spin like that.
.
Life continued this way until a few months before Marquette turned 15 when her family moved to a town in southern AZ. As Marquette and the Mower boys weren’t close friends before moving, they didn’t really think of each other much at that point, only when passing memories of 4-H and awkward stake dances came through. In 2003 Cameron left on his Mission to Seattle, WA and Marquette left for college at Eastern Arizona College. During her first week at college, Marquette ran into Cameron’s older brother Nate at an Institute activity. They became friends and hung out a few times and even went on one date together (dressed as banking chicken superheroes). Nothing romantic ever bloomed there, but they both enjoyed each other’s friendship there at EAC for 2 years.
.
December of 2004 came around and one of Marquette’s cousins in Edgewood got married (the same cousin from the previous story with Cameron upside down), so she travelled with her Dad up to the open house. Kerry and Kathleen also happened to be in attendance at the party and they quickly fell into conversation with Marquette. They asked about college and everything she was doing and has a pleasant conversation. Eventually the conversation got turned to Cameron, who was still on his mission at the time, but would be returning sometime in April. 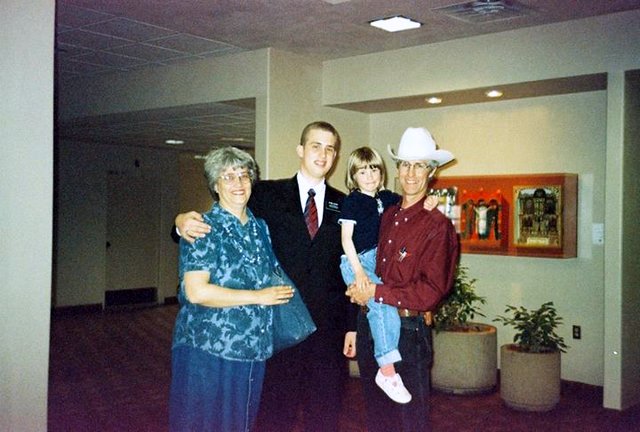 Marquette asked what his plans were after that and they told her they were sending him down to EAC to start school. Knowing that Marquette was going to be at EA for a 3rd year they asked her to watch out for him and help him out. Marquette of course reassured them that she’d find him and help him get settled in. Scott and Paralee’s teasing about marrying a Mower boy increased at this point, but Marquette just laughed and said “Yeah right, Dad.”
.
(Click here for Part 2)

Layout by The Design Space

I believe that simplicity is stunning,
real life is beautiful,
and that someday pigs really will fly